Flirting with guys is all about having fun!

“Don’t be afraid to compliment a random stranger if he has a gorgeous beard, it leads to the digits, believe me!”
That was my Facebook status update and as ridiculous as it may sound, I really did something like that.
I was on the train and I saw this guy with a very gorgeous beard. I couldn’t help but admire this rugged beauty and something weird happened. I had the feeling that I should compliment him.
So, I leaned in and said, “You have a fantastic beard.” I smiled, leaned back, and kept a space between us.
I didn’t want to make him feel awkward. I had no intentions of giving him my number either. I just wanted him to know what I thought about his beard.
Oh boy, you won’t believe this, but he blushed! He said, “Thank you” and mentioned he just went to the barber shop.
We chatted a little and this nice gentleman was very respectful and appropriate. He even gave me his number, just in case I wanted to go have some coffee with him.

Ladies, that’s how you flirt with class

When I shared my success story about flirting with a guy in public, I was expecting many of my friends to have similar experiences. I was surprised to hear that several of my good looking guy friends, who maintain a very nice beard themselves never encountered a woman like me before.
Perhaps, women don’t feel that it’s appropriate and safe to flirt in public. You can’t blame them, a bunch of beautiful ladies out there had seen different kinds of street harassment, such as arm grabbing and cat calling. Some guys might think that it’s a form of harmless flirting, but it’s a kind of socially acceptable assault.
No one would want to experience that kind of treatment. That’s why I also wonder why some people are fond of doing that.
Not just that, there are also hyper-aggressive men who would do something very inappropriate if given the chance. If we smile at a stranger, they’ll think that we’re asking for something that’s very inappropriate.
That’s the main reason why ladies would rather keep a blank face and ignore strangers when they’re in a public setting– even when that stranger is exactly their type.
It’s so unfair, right?
Flirting is fun, especially when you understand what men secretly want.  I enjoy winking at the guy at the bank, complimenting a fellow in his formal attire, and smiling flirtatiously to a handsome gentleman who opens the door for me. These experiences make me feel prettier and more confident about myself.
It makes me feel alive. Best of all, it gave me the opportunity to have a fun and a flirty coffee date with a handsome, bearded prince! 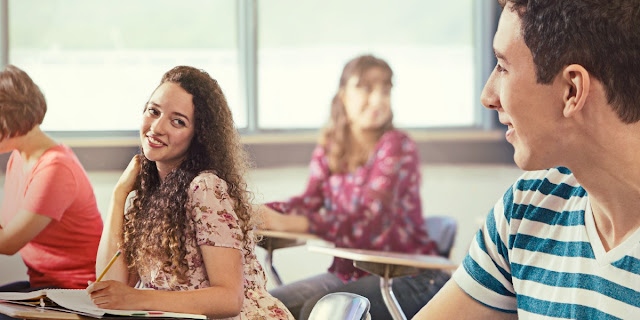 I want other ladies to experience the same. So, I’m going to share my top 5 tips on how to flirt with guys in public.
Wishing you all the luck in this world, my lovelies! Who knows, maybe next time when you take the public transpo, you might see the man of your dreams.
Be ready and have fun!