Sex isn’t just about the genitalia, even though they play an essential role.
In fact, sex is a whole body experience, and there are more female erogenous zones than you might imagine.
And stimulating your partner’s different erogenous areas will vastly improve her experience, and can make it easier for her to climax.

What is an erogenous zone?

In basic terms, an erogenous zone is an area of the body that elicits a sexual response when caressed, stroked, licked, kissed etc.
Of course, in most situations that sexual response won’t be an orgasm. But being touched in an erogenous zone feels good, is relaxing, and helps a woman get turned on.
So let’s take a closer look at where you should send your fingers and tongue exploring next time you’re with your lady.

The clitoris is probably the most well known of erogenous zones. There are tons of nerve endings here, and stimulating the clitoris is usually the best way to give a woman an orgasm.
There are plenty of ways to stimulate her here, from manual stimulation to oral sex to penetration. However, the clitoris shouldn’t be your first stop – it’s usually too sensitive until she’s warmed up.
Get her turned on with some good foreplay first, and by spending time on her other erogenous zones.

The vagina also contains a huge number of sensitive nerve endings, both inside and out (though the clitoris is a more concentrated area of nerves).
Stroking the lips of her vagina lightly, caressing the entrance either with fingers or your tongue, and eventually penetration, will all stimulate the area.
The key to good touching here is plenty of lubrication to smooth things along.
Perhaps she’s already naturally lubricated, or perhaps you’re going for oral stimulation, in which case saliva is lubricating her. If not though, make sure you use some good lube.

Her bum cheeks can feel great to the touch (both for you and her!). Find out whether she likes gentle stroking, light or hard spanking (at the right time), or simply to be held tightly.
Anal stimulation isn’t to every woman’s liking, but there are lots of nerve endings here, and it’s definitely an erogenous zone.
The anus can be stimulated with a lubricated finger gently circling the hole, or with a tongue. And of course, it can be penetrated too, either with the penis or with toys.
Again, this isn’t for everyone, and it’s often best to ask your partner if it’s a no-go zone or not rather than surprising her with a naughty finger.

The inner thighs are sensitive in their own right, though a lot of the excitement does comes from the fact that they’re close to the genitals.
The skin is soft and relatively thin, meaning your touches need to be gentle. Licking, careful nibbling, and stroking are recommended for the inner thighs.
And if you want to amp up the game a little on a hot day, try tracing an ice cube slowly up and down the thigh. 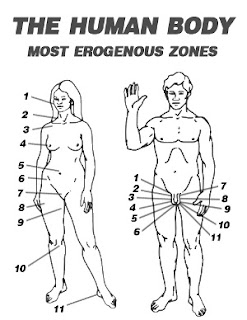 Whilst not strictly accurate, this classic joke does have an element of truth – women tend to enjoy more of their body being touched than men do.

Similar to the inner thighs, the inner arms are also especially sensitive given the thin skin in the area. And as odd as it might seem the armpits are full of nerve endings too.
The inner arms can get the same treatment as the inner thighs: licking and nibbling. But for best effect, try tracing your fingers down from armpit to elbow and back again (a move I personally love).
If you’re willing caress her armpits, try circular stroking motions with the tips of your fingers. You should verge on the edge of tickling, but not quite get there. Caution is advised though – not all women like this!

Another area that you might not have considered, but the ears are full of clusters of nerve endings (like most extremities are).
The safest ear touch is with the hands. Simply trace the curve of her ear with your fingertips whilst you’re kissing.
Ear licking is awesome when done right, but is an acquired taste for most people (both giving and receiving), so take it slow while you work out what she likes.

The neck is super sensitive, and only needs the gentlest of touches to elicit shivers. But it’s an area where nearly everyone I’ve met loves being touched.
And science backs up my anecdotal evidence. A 2014 Canadian study found that the neck was the body area most responsive to light touch.
So you don’t need much stimulus here. Light stroking with the fingers, sweeping her hair up and giving her gentle kisses. Even just breathing on the back of the neck can feel incredible.

The nipples are probably the best known erogenous zone outside of the genitals, and the vast majority of women are very sensitive here.
Sucking is good, kissing is good, gentle circular touching is good. Biting is generally not good (unless you’re asked to do so), and twisting or turning nipples like a knob is also not good.
Again, if it’s hot, bring out the ice cubes and swirl them around the nipple for a breath-taking sensation.

You might not have considered the fingers to be an erogenous zone, but given the vast number of nerve endings in the fingertips, it shouldn’t be a surprise that they really are.
Finger sucking and even nibbling of the fingertips is good. But if you want a new finger move try this:
Put all of your fingers together in the middle of her open palm and then slowly spread your fingers out so that they stretch over hers.
This is a great opening move, and one you can use long before you get to the bedroom.

Obviously, lips are an erogenous zone, which is one reason we kiss. With two major nerves running alongside the mouth, the lips are both sensitive and one of the most exposed erogenous zones on the body.
But as well as kissing, try running your fingers lightly over her mouth, or nibbling on the top lip very gently. Mouths aren’t just for kissing, and lips will respond to stroking just like any other erogenous zone.

I’ll be the first to admit that feet aren’t for everyone. But they are an erogenous zone, full of nerve endings (which is why they’re ticklish).
Toe sucking can be great, or light stroking on the sole of the foot (again, verging on tickling but not quite getting there).
If you’re unsure about the whole foot thing and toe sucking is taking things too far, try a nice foot massage instead. Even with socks on, the feet are still remarkably sensitive.

For women, the stomach is quite an important erogenous zone. The abdominal muscles in the stomach are connected to those around the vagina (which explains why some women can orgasm just from doing core body exercises).
Try gently stroking your fingers up and down over her stomach, getting further down each time until you’re approaching her genital area.
This will make her stomach muscles start to contract, which in turn will provide more blood to the areas below.

The thin skin behind the knee means that nerve endings are very close to the surface, which equals pleasure when touched.
It can be tough to get access to behind the knee in many sexual positions. But gentle stroking and caressing is possible if her legs are flat. And if you’re giving her a massage, don’t forget this area.

It might seem trite to include the brain, but the fact is that for women the brain IS an erogenous zone. Women need to be in the right “mind state” in order to really get into things.
How do you stimulate the brain? A little dirty talk is good. But the main thing is not to distract her. Let her be in the moment. Interrupting her train of thought isn’t a good thing.
And science backs me up here. The brain acts as the connection between the visual and the physical. In fact, research shows that the brain reacts in the same way if a person is being caressed or just watching someone else being caressed.
The bottom line? Her mind is as important as her body, so don’t neglect it.
Communicate. Laugh. Light some candles. Give her flowers. Put on some relaxing music. Be 100% present in the moment.
These are just a few ways to connect with her mentally and emotionally, making sex all the better.